What is prestressed concrete?

Concrete, like stone, is very strong in compression and works well when used as a vertical column or supporting post, for example. When used horizontally as a slab or beam, concrete can typically span only short distances before it begins to crack and fail unless it is made thicker. The depth and weight of a plain concrete beam soon become too large and impractical for longer horizontal spans required in buildings and bridges.

Builders learned that the addition of metal reinforcing bars in a concrete beam or slab would allow it span greater distances before cracking. As a result, reinforced-concrete became an important structural material for bridge construction after 1900. Virtually all modern concrete is reinforced with metal.

Here are several explanations of prestressed concrete and how it works:

Even reinforced concrete has limited capacity to span distances before cracking and failing under stress. In the years before World War II, european engineers experimented with a new system of treating concrete to increase the span length even further with less weight. This system became known as “prestressed” concrete, because tension or stress was applied to the concrete beam before it was placed in position.

One of the early engineers, Gustave Magnel, compared this system to holding up a row of books by pressing them tightly from each end and lifting them in the air. In a similar fashion, a concrete beam could be held tightly from each end by the use of a steel rod or cable. A concrete beam is “prestressed’ because stress is created before, or “pre,” the actual use of the beam when the working stress is applied.

A properly engineered prestressed-concrete beam can span longer distances than a reinforced-concrete beam and it is thinner, lighter in weight, and uses less concrete without cracking or breaking. Figure 1 - Here is Belgian engineer Gustave Magnel’s drawing that explains prestressing by showing how a row of books, pressed tightly together end to end, becomes a beam capable of supporting more books. 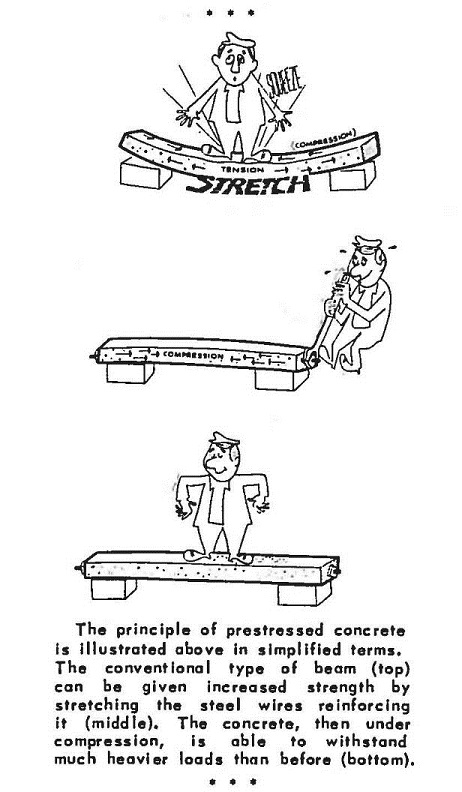 Figure 2 - In April 1960, "Minnesota Highways" magazine published this cartoon to illustrate the advantage of post-tensioning a concrete beam to prevent cracking when under a load.

Prestressed concrete is created through one of two processes: post-tensioning and pretensioning.

The simplest type of early prestressed-concrete beams used steel cables to tightly tie together a row of concrete blocks end to end. This is like lifting a row of books by pressing them together from each end. It’s called “post-tensioning,” because the concrete blocks are tensioned after they are produced by a conventional concrete block-casting process. A portable hydraulic jacking device tightens the cables, creating the required tension.

Instead of using individual blocks, a single concrete unit could be cast with tubes or conduit inside for the tensioning cables to be added afterward. This method was used on several early Minnesota bridges.

The post-tensioning system required simple equipment and could be done almost anywhere, including at the bridge site. In fact, the first prestressed-concrete bridge in Minnesota was post-tensioned.
Because post-tensioning was limited to smaller beams and slabs, the alternate method of pretensioning became the industry standard after the early years. Figure 3 - This is a detail from the original 1957 engineering plan for the post-tensioned slab design for Bridge 9065, originally located on Highway 61 just south of Winona, but now replaced. Shown are pairs of cross-section views from two slabs: the bottom pair are from one of the two slabs on the outside of the span and are termed the “fascia” or exterior slabs. At bottom right is a section of the end of the slab and at bottom left is the center of the slab, showing the cylindrical hollow centers of each slab, saving concrete and weight. The top pair is from one of the interior slabs, again showing the end at top right and the center at top left. The horizontal row of dots just above the bottom of the beam represent the locations of the steel strands that are pulled through the slab after the concrete is cured and then tensioned.

All prestressed bridge beams today are made with the pretensioning process, which is more complicated than the post-tensioning process. Pretensioning requires the construction of large “casting beds” to hold the steel cables, called “strands,” in a highly tensioned state while the concrete is poured around them in molds.

With pretensioning, fabricators created much larger beams and slabs. The casting beds were constructed in long factory-like buildings, allowing year-round production under controlled conditions. The length of the pretensioned beams was limited by transportation restrictions between the plant and the bridge site and by the availability of cranes capable of lifting the beams into place. Unlike steel beams, which could be transported in shorter sections and bolted together at the bridge site, prestressed-concrete beams had to be trucked in their finished length and could not be assembled from shorter units. 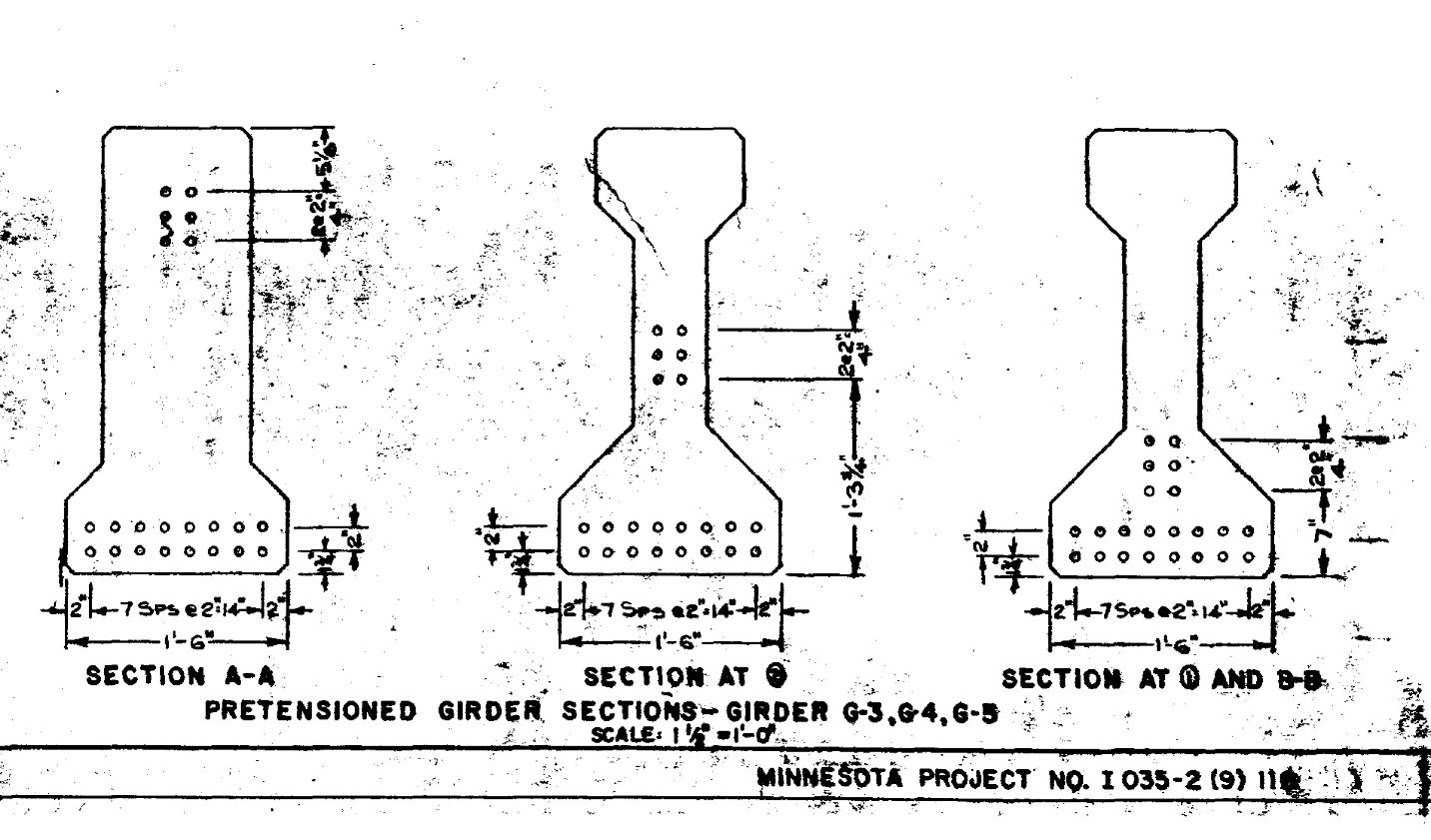 Figure 4 - This is a detail from the original 1958 engineering plan for the pretensioned girder design for Bridge 6579 in St. Paul (now replaced). This shows three cross-sections of one beam or girder. At left (A-A) is an end view and at center and right are two views at mid-points. The drawings indicate that the beam is shaped like an “I”-beam except at the ends, where it is thicker to prevent cracking. The dots on the sections represent the location of the prestressing steel strands that extend from one end to the other. These strands are cast inside the concrete beam.

First in the US: Walnut Lane Bridge, Philadelphia, 1950

Philadelphia’s Walnut Lane Bridge, completed in late 1950, is considered the first major prestressed-concrete bridge in the U.S. Gustave Magnel, a Belgian engineer, and Charles Zollman, Magnel’s student, designed the bridge. Each of the post-tensioned concrete beams was cast at the bridge site in a single piece. After the concrete hardened and cured, a cable was extended end to end through a designed opening. A jacking device applied tension to the cable, which was then fixed in place. The original beams and superstructure were replaced in 1989-90. 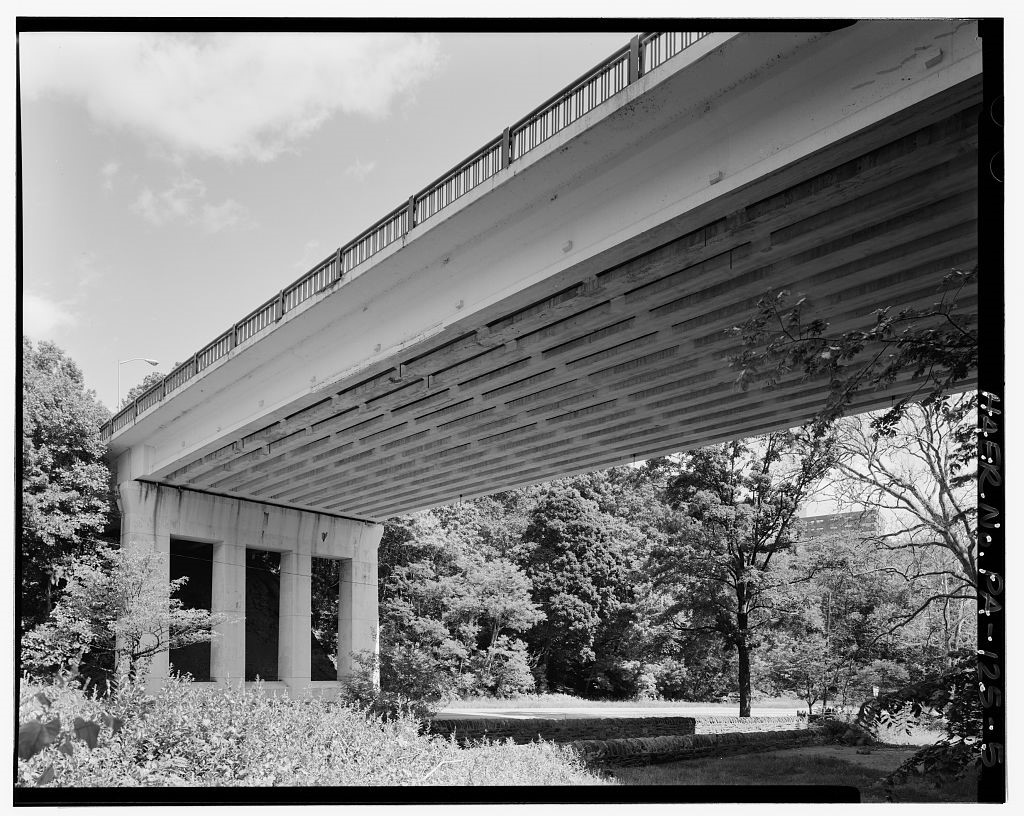 In 1952, brothers Norbert and Leonard Soukup established the Northern States Prestressed Concrete Co. to build the first prestressed-concrete bridge of any kind in Minnesota, using the post-tensioning method. They assembled rows of specially designed concrete blocks, tensioned them together in a long row with cables, and created a series of prestressed-concrete block-beams. The beams created the span for a bridge carrying local traffic from U.S. Highway 61 to a Boy Scout Camp outside Lake City. The bridge has since been replaced. Figure 6 - Constructing the Lake City Bridge in a series of numbered views: (1) The post-tensioned block beams were assembled in the Minneapolis plant of the Northern States Prestressed Concrete Co. and trucked to the bridge construction site near Lake City, just off Hwy. 61. (2) A closeup view of three of the block beams resting on the ground next to the workhouse. The tensioning cable is visible along the side of the nearest beam. (3) A view of one block-beam in place from the center pier to the far abutment, extending away from the camera, with a second beam being lowered by crane. (4) All the block beams are in place. (5) Workmen on the block-beam span, preparing to install the transverse cables that tie the beams together, side by side. 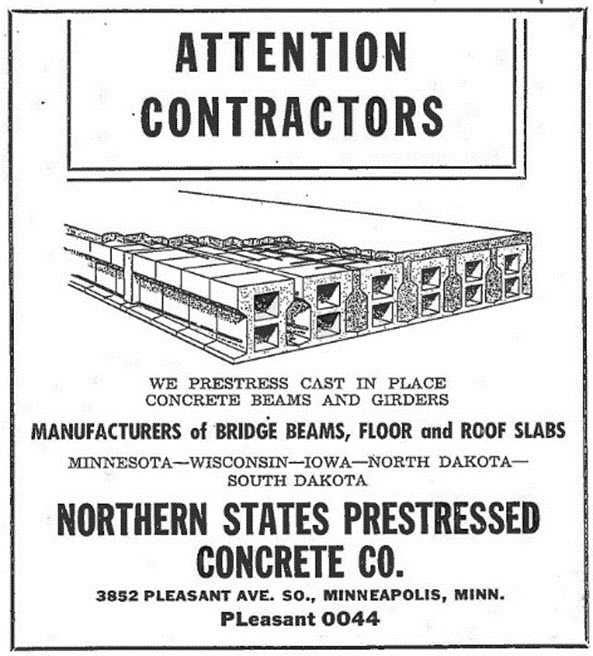 Figure 7 - This is an advertisement for Northern States Prestressed Concrete Co., with an illustration of their block beams as used for the Lake City Bridge spans. Compare this view with the photo of the beams in Figure 6 (see view 2 upper right), showing the side of the block-beam with the post-tensioning strand on the outside of the beam. Ad from the "Construction Bulletin," August 6, 1953.

After the Lake City bridge, the Soukup brothers built a plant for their new company, Prestressed Concrete, Inc., in the growing suburb of Roseville, Minnesota, to fabricate pretensioned concrete beams. Charles Zollman, who worked on the Walnut Lane Bridge, advised the brothers in the design of their casting beds for the new plant. At the Roseville casting yard, the Soukups produced prestressed-concrete beams for buildings and bridges, including Minnesota’s first major prestressed-concrete bridge to carry 94th Street over the new Interstate 35W highway. The bridge, with its original beams, still carries 94th Street and is listed in the National Register of Historic Places. Figure 9 - Advertisement for the Soukup brothers’ new casting and fabricating plant, Prestressed Concrete, Inc., in the expanding postwar suburban Twin Cities community of Roseville. Here they produced the prestressed-concrete beams for Bridge 9053. Designed to enclose the linear casting beds, it consisted of a long enclosure with a vertical unit to house the concrete mixing plant, allowing year-round operations under climate-controlled conditions. Northwest Architect, May - June 1957.

Prestressed bridges and the interstate highway in the 1950s

Created by the Federal Aid Highway Act of 1956, the new Interstate Highway System demanded thousands of new bridges across the nation. Designed as freeways, the new highways would have no traffic intersections anywhere. All highways and railroads would go over or under the new Interstates. Because the design of the new Interstate was so uniform and consistent with an original four-lane system, most of the bridges were similar in shape and length. The requirements created a perfect match for the new prestressed-concrete system, which readily turned out quantities of uniform beams, cast in off-site plants, under controlled factory conditions, independent of the weather and site conditions. Also, the new prestressed-concrete beams proved competitive with steel beams in size and cost, especially when steel was scarce and expensive in the 1950s.

The Interstate System helped create a major prestressed-concrete industry virtually overnight. The same plants often fabricated beams, slabs, and planks for roofs and floors to build the many new shopping centers, schools, stadiums, offices, and other structures for the suburbs accessed by the Interstate Highways. Figure 10 - These sketches of an Interstate highway show the consistent design and dimensions of the bridge to cross four lanes as seen in various situations. The spans lengths remain the same for bridge after bridge.