Careful inspections, regular maintenance, and rehabilitation of Minnesota’s historic bridges is ongoing statewide. Below are several current and recent projects.

The planned rehabilitation for Bridge 27004, the iconic Stone Arch Bridge, will include a rehabilitation of all the stone on the bridge: stone arches, embankments, piers, and underwater foundations. During this work there will be disruption to the popular pedestrian path on the bridge deck, but efforts to reduce the long-term impact are still being developed. During the assessment a series of cores were taken from stone and mortar to determine their condition and assist in selecting appropriate repair materials. Also, a 3D model of the bridge was created to help facilitate the identification of repairs and will be used to guide construction activities.

When complete: all mortar joints will be repointed, minor stone cracking will be repaired, severely deteriorated stones will be re-faced with a deep veneer stone that matches the existing stone, drainage weeps and metal tie rods will be repaired, and scour and breakwater protection will be installed at the base of the piers.

The project is expected to begin in the spring of 2022. 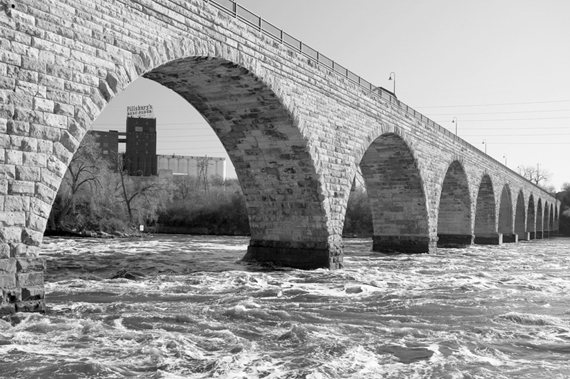 The Kern Bridge (Bridge L5669) was located in the southeast corner of South Bend Township in Blue Earth County. In winter 2020, the bridge was removed from this site, dismantled, and stored for relocation. MnDOT then advertised the bridge as available for re-use. The bridge is now planned to be rehabilitated by the City of Mankato as a pedestrian and bicycle bridge over the Blue Earth River. Although Mankato is urban, the future Kern Bridge setting is wooded, crosses the Blue Earth River and is a similar setting to the original bridge site. Pedestrians and bicyclists will access the bridge through the existing trail system. The bridge will be seen from the north via a scenic overlook and from the south via Hwy 60/Hwy 169. The bridge is planned for rehabilitation in 2024. The planned rehabilitation for Bridge 2440, the Third Avenue Bridge over the Mississippi River in Minneapolis, includes removal and replacement of the deck, rehabilitation of the ornamental railing panels, and repair to piers, arch ribs, and barrel arches. When replaced, the railing will be elevated on a concrete curb to achieve the required height standard and current openings will be narrowed to code-required dimensions through the use of narrow bent bars. Spandrel columns will be removed and replaced with new spandrel cap beams closer to the original design. The character-defining Melan arches will receive extensive repairs along with proposed cathodic protection to reduce further chloride deterioration. The piers are also character-defining but badly deteriorated; therefore, piers 1 and 8 will be extensively reconstructed and remaining piers 2-7 will be repaired. North (east bank) abutment retaining walls will be partially reconstructed.

Wabasha County used funding from a Minnesota Historical & Cultural Heritage Grant (Legacy Grant) to develop rehabilitation plans for this 1937 multi-plate arch bridge that carries County Road 68 over a tributary of the Zumbro River. The project will include a complete repointing for the headwalls, railing, piers, and abutments, with replacement of deteriorated or missing stones. The concrete arch ring, formed to replicate a stone arch ring, will be repaired, along with deteriorated concrete in the piers and abutments. Fill over the arches will be excavated to apply a waterproofing coating to the multi-plate surface and the drainage system will be rehabilitated to assure proper functioning. Rusting arch surfaces will be cleaned and coated to slow corrosion.

The Split Rock Bridge (Bridge 5744) is a true stone-arch structure, built by the Works Progress Administration (WPA) in 1938, carrying County Road 54 over Split Rock Creek near Ihlen in Pipestone County. Rehabilitation plans were prepared with funding from a Minnesota Historical & Cultural Heritage Grant (Legacy Grant). The roadway and fill will be removed above the stone arch and all stone masonry on the interior and exterior will be repointed. The upper surface of the arch will be protected by waterproofing before the fill is replaced. Deteriorated sections of the railings and upper wing walls will be reconstructed using replacement stones where necessary from the Jasper Quarry located four miles south of the bridge, which is the source of the original stone for the bridge. All work will comply with the Secretary of the Interior’s Standards for Rehabilitation.

The four culverts are in fair to poor condition and a basic rehabilitation is planned for each one. Included will be a selective replacement of cracked and unsound stones, reconstruction of severely deteriorated sections, and repointing overall. The existing stone floors will be repointed or reconstructed and a new protective concrete overlay will replace the existing overlay to protect against scour and erosion from the high-velocity water. Geo-grid soil reinforcement will be installed where needed for slope reinforcement. Flume walls will be repaired or reconstructed and also extended where necessary. The I-beams added to the metal multi-plate arch in Bridge 8593 will be removed and corroded partial plate sections will be replaced.

Using funding from a Minnesota Historical & Cultural Heritage Grant (Legacy Grant), Waterford Township has prepared plans for the rehabilitation of Bridge L3275, a historic Camelback through truss crossing the Cannon River near Northfield in Dakota County. The planned project, designed to comply with the Secretary of the Interior’s Standards for Rehabilitation, will reconstruct elements of the concrete abutments and remove and reconstruct the concrete deck. Existing bearings will be replaced with modern bearings. Selected gusset plates will be modified with steel plates and the existing railings will be replaced with new code-compliant railings. The trusses and floor system will be blasted and repainted and the one existing historic bridge plaque will be refurbished and replicated to replace the second and missing plaque.

Using funding from a Minnesota Historical & Cultural Heritage Grant (Legacy Grant), the City of Beaver Creek, Rock County, has prepared plans for the rehabilitation of the historic Bridge L4646, constructed in 1911 to carry Sixth Street over Spring Brook. Perley N. Gillham, a local bridge builder, designed this important early reinforced-concrete bridge. The planned rehabilitation will repair all deteriorated elements of the existing concrete, including spalled surfaces, cracks, and delaminated areas. The existing gravel road surface will be removed to expose the top of the concrete arch for repair and waterproofing. All work will be completed in compliance with the Secretary of the Interior’s Standards for Rehabilitation.

In the last 20 years, Minnesota bridge owners have rehabilitated more than 40 historic bridges. Below are several recently completed examples.

Bridge 2796 underwent rehabilitation, including replacement of the deck and reconstruction of the spandrel caps and columns, in 2019-2021. Unsympathetic railings and light standards added during a 1970s renovation were replaced by units more closely reflecting the original design. The upstream sidewalk, which was removed in the 1970s, was reinstalled and bike lanes were added to the deck.

Completed in 2021, Bridge L5391 underwent repairs to address the conditions to the bridge's deck, truss structure, bearings, concrete abutments and wingwalls, and railings. Some highlighted repairs included: truss bearings were replaced with new elastomeric bearing pads, deteriorated/missing railing endposts were replaced with cast replicas, timber bridge deck was replaced with a new concrete deck, backwalls of the existing concrete abutments were replaced, bridge was repainted in a historically appropriate neutral gray, and the name and date plaques above each portal were cleaned and preserved.

On August 2, 2017, MnDOT redirected all vehicular traffic from the historic Stillwater Lift Bridge to the nearby new St. Croix Crossing bridge. The Stillwater Lift Bridge’s closure formally ended its 86-year-life as a major vehicular transportation crossing of the St. Croix River. The subsequent two-year rehabilitation project has converted the bridge to pedestrian and bicycle service on a new trail system. Still subject to federal navigation regulations, the lift span continues to operate on an official schedule.

The conversion project included a significant rehabilitation of all parts of the bridge, including the mechanical lift machinery and upgrades to the system’s electronics. Necessary repairs were made to the bridge tender’s house and some structural members. Railings and sidewalks were reconfigured to meet requirements of the Americans with Disabilities Act (ADA). Historic lights and the concrete balustrade were restored and the entire bridge was repainted in its original green color. A significant feature, the approach concourse on the downtown Stillwater end, was reconstructed to bring back its original surface configuration. All rehabilitation and repair work was completed in compliance with the Secretary of the Interior’s Standards for the Rehabilitation of Historic Properties.

Bridge 3355, the Whitefish Creek Bridge, carries U.S. Highway 169 over White Fish Creek, where it enters Lake Mille Lacs in Mille Lacs County. The bridge will undergo rehabilitation beginning in 2019. Historic stone masonry will be repaired and repointed, including bridge abutments, walks, and the guardrail stone wall. The bridge deck and approach lanes will be reconstructed and an integral Wyoming-type guardrail will be installed.

The 1942 Winona Bridge (Bridge 5900) completed a full rehabilitation in 2019. To accommodate increased traffic between Minnesota and Wisconsin, a second and parallel Mississippi River bridge was first built just upstream in 2016. At that point, all traffic was temporarily shifted to the new bridge and the historic bridge was closed for rehabilitation. Both bridges are now open to traffic as a one-way pair.

The three, steel, cantilevered, through-truss spans across the river—the bridge’s most significant feature—received extensive steel repairs, completed in compliance with the Secretary of the Interior’s Standards. Truss members also were retrofitted for internal redundancy as a state-required safety measure. These main spans retain all historic features and character.

The steel deck-truss approach spans on each end of the through trusses, also significant features, were removed and replaced with replica trusses using modern steel materials and construction techniques. The concrete approach spans on the south or downtown Winona side of the river were replaced with new prestressed-concrete spans in a modern design reflecting the materials and character of the original spans. At each end, the abutments of the historic and the new bridges are situated side-by-side in a complimentary arrangement, with original historic features replicated in the reconstructed abutments.

The Boom Island Bridge (Bridge 93835) was originally built in 1901 by the Wisconsin Central Railway Company to provide rail access from Nicollet Island across the Mississippi River channel to its new railroad yard on Boom Island. The Pratt through-truss was designed by Charles F. Loweth, an important Minnesota bridge engineer. The rail yard and buildings were removed around 1970 and the area was converted into today’s park. The bridge was converted from rail to bicycle and pedestrian use.

In 2018-2019 the bridge was rehabilitated. The existing timber deck was removed and steel repairs were completed to deteriorated parts of the floor support system. A new wood plank deck was installed. When in service as a railroad bridge, there was no railing. The chain-link fence added for pedestrian use was replaced with a new metal tube and cable railing with safe narrow openings. Concrete abutments were repaired. The entire bridge was cleaned of deteriorated old paint and repainted and sealed to minimize the development of pack rust.