The Phalen Park Arch Bridge is a three-span, closed-spandrel, reinforced-concrete arch bridge constructed in 1910 and remodeled in 1934 under the Civil Works Administration. It carries a multi-use trail over the South Canal of Lake Phalen in Phalen Park in Saint Paul. Bridge L8560 is significant as an early example of a concrete-arch bridge in Minnesota and for its high artistic value with its elegant two-centered, reinforced-concrete, barrel-arch design and Rustic-style spandrel walls and railings. 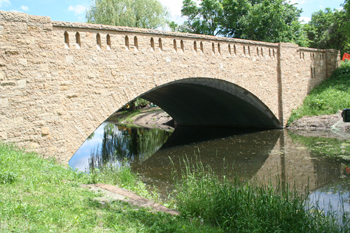 In 2012-2013 the City of Saint Paul completed rehabilitation efforts on the bridge. As part of the rehabilitation, precast arch liner panels were added to the underside of the arch for structural integrity and a new concrete deck was installed. The stone on the spandrel walls and railings, all of which was severely deteriorated and beyond repair, was completely removed and replaced in-kind. Railings were reconstructed to match the original design while meeting current crash safety requirements.