Bridge L8506 is a two-span, reinforced-concrete, filled-spandrel, double-barrel vault, continuous arch bridge that was constructed in 1912. It carries Seven Bridges Road (also known as Snively Boulevard) over Amity Creek in Duluth, and was one of eight stone-faced bridges along the boulevard that were designed by the Minneapolis firm of Morell and Nichols. Four of the historic bridges, including this one, remain. Seven Bridges Road is a contributing segment of the Skyline Parkway Historic District and Bridge L8506 is significant as a contributing structure to the district. 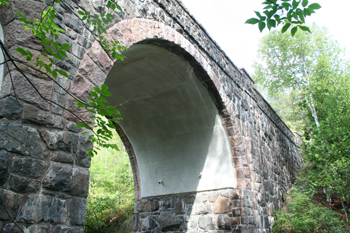 In 2004 Bridge L8506 underwent a major rehabilitation where the entire bridge was repointed, the arches and walls were excavated and waterproofed, a drainage system was installed, the roadway was replaced, the railing and portions of the headwalls and wingwalls were re-built, the underside of the arch was repaired, and the pier base was encased in concrete. The south side of the pier and the southwest slope were scoured during the June 2012 flood event. A repair plan has been prepared and work to protect the abutments will be conducted in the summer of 2014.