Bridge L8505 is a single-span, reinforced-concrete, filled-spandrel, barrel-arch bridge constructed in 1912. It carries Seven Bridges Road (also known as Snively Boulevard) over Amity Creek in Duluth, and was one of eight stone-faced bridges along the boulevard that were designed by the Minneapolis firm of Morrell and Nichols. Four of the historic bridges, including L8505, remain. Seven Bridges Road is a contributing segment of the Skyline Parkway Historic District and Bridge L8505 is significant as a contributing structure to the district. 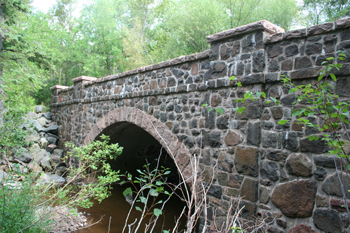 Bridge L8505 underwent a major rehabilitation in 2001 where the entire bridge was repointed, the arch and walls were excavated and waterproofed, a drainage system was installed, the roadway was replaced, the railing was disassembled and re-built, the underside of the arch was repaired, and the north slopes were protected with riprap. The bridge abutments were scoured during the June 2012 flood event. A repair plan has been prepared and work to protect the abutments will be conducted in the summer of 2014.