The Lincoln Park Bridge is a two-span, reinforced-concrete, arch bridge completed in 1927. It carries West 10th Street over Miller Creek and Lincoln Park Drive in Duluth. The railings, headwalls, wingwalls, and retaining walls are constructed of stone. Bridge L8477 is significant for aesthetics and as a contributing structure to the Skyline Parkway Historic District. 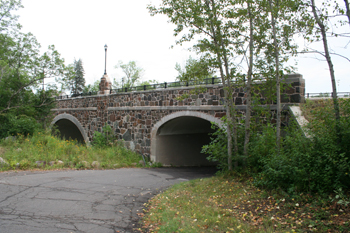 The City of Duluth rehabilitated Bridge L8477 in 2006 and 2007. As part of the rehabilitation efforts, the bridge was repointed, missing stones were replaced, the arches were repaired and waterproofed, lighting was added to the bridge, and the roadway and sidewalks were replaced (among other miscellaneous repairs). The bridge suffered some damage in the June 2012 flood. Plans are underway to repair the bridge including resetting the northwest wingwall cap stones, stabilizing the southwest retaining wall and east abutment, and replacing the trail adjacent to the structure.