The Stewart Creek Bridge was constructed c.1925. It is a single-span, stone-arch highway bridge built of locally quarried gabbro rock, an abundant, commonly used building material in the Duluth area. It carries an unpaved section of the Bardon’s Peak segment of Skyline Parkway over Stewart Creek, which lies below in a ravine. Bridge L6007 is historically significant for its highly picturesque setting and design of a stone-arch highway bridge. 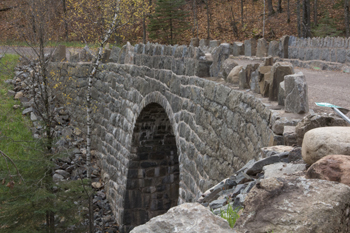 The City of Duluth rehabilitated this structure in 2012-2013, along with the adjacent Snively Memorial. Rehabilitation of the bridge included re-pointing masonry joints on the spandrel walls, wingwalls, railing, abutments, and arch underside. The wingwall and railing were also reconstructed. The sawtooth stones on the railing were removed, reset, and replaced in-kind where needed. The arch was excavated; weeps, a waterproofing membrane, and drainage system were installed; and the backfill was replaced with clean fill. Riprap was placed at the abutments, the bridge deck was resurfaced (with aggregate), and the approaches were re-graded.