The Washington Avenue Bridge was constructed in 1965 to carry vehicular and pedestrian traffic over the Mississippi River and to link the expanding University of Minnesota main east campus to a new west bank campus. The 1,130-foot-long, six-span bridge has three main spans, which are continuous welded haunched steel girders, and two steel girder approach spans. In 2012 four Warren deck-truss lines were added between the original steel girder lines to support the addition of light-rail tracks and the approach spans were also upgraded with additional supporting deck-truss lines. This bridge was one of the first in the nation to use A441 high-strength, low-alloy steel in its superstructure, which allowed for the structural connections to be welded rather than riveted. It is also the only known double-deck bridge in Minnesota with a pedestrian upper deck and a vehicular lower deck. The Washington Avenue Bridge is significant for its innovative engineering techniques and as an important crossing in Minneapolis connecting the university campuses. 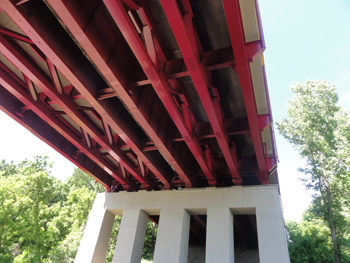 Substantial rehabilitation of Bridge 9360 occurred from 2011-2013 to accommodate the new Central Corridor Light Rail transit line. In order to support the new light rail transit line and existing vehicular and pedestrian loads, two lines of Warren trusses were added between the original plate girders. Additionally, two additional pier columns were added to accommodate the additional loads on the bridge. Care was taken to minimize visual impacts to the bridge and to maintain the design aesthetic of the original structure.