The Gateway Trail Iron Bridge is a wrought-iron Parker truss that carries Gateway Trail over Manning Avenue (County Road 15) in Washington County. The bridge was originally constructed in 1873 in Sauk Centre. It was relocated to Koochiching County in 1937, where it carried State Highway 65 over the Little Fork River. The bridge was erected at its current location in 2011 to serve as part of a pedestrian/equestrian trail. The Gateway Trail Iron Bridge is significant as an early iron bridge in Minnesota and as an example of an early Parker truss. 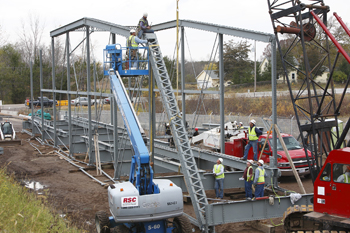 In 2011 MnDOT re-erected and installed the historic Silverdale Bridge as part of the DNR Gateway-Brown’s Creek Trail. Built in 1873 during the days of the horse and buggy, at is new site the bridge again serves horses, along with pedestrian and bicyclists. This wrought-iron truss bridge began service in the nineteenth century on Main Street in Sauk Center. In 1937 the bridge was dismantled and moved to Highway 65 in Koochiching County. By the 2000s a new bridge was needed to accommodate heavy logging trucks and modern traffic, so in 2009 the historic bridge was dismantled and stored. For historically accurate reassembly at its new site, shop riveting was used on select members, and field riveting was done for the first time in Minnesota in many decades. Watch videos (preservation process (YouTube) and bridge installation (YouTube) about the preservation process.