The Lester River Bridge, built in 1924-1925, carries London Road-Congdon Boulevard (State Highway 61) over the mouth of the Lester River along the Lake Superior shoreline in St. Louis County. At the time of construction it carried State Highway 1, one of the state’s longest and most important early highways. It is a concrete, filled-spandrel, rib-arch span and the shore of Lake Superior is located immediately to the south. The bridge was designed by landscape architects Morell and Nichols, with engineering assistance from Duluth city engineers and additional design assistance from Minneapolis architects Tyrie and Chapman. The design was influenced by the Neo-Classical Revival style. The headwalls and railings are faced with local stone and trimmed with Cold Spring granite. The bridge is a significant component of Duluth's street and parkway system and for its association with the construction of State Highway 1. Architecturally, the concrete arch span bridge is significant for its outstanding Neo-Classical Revival design. 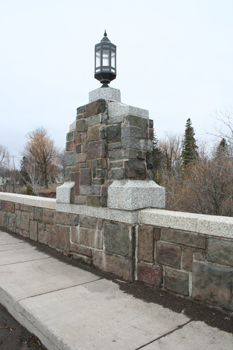 MnDOT rehabilitated the lake side portion of the Lester River Bridge following the partial destruction of the bridge’s railing in 2005. In 2010 rehabilitation of the upstream portion of the bridge was completed with funding from the federal enhancement program. Work included updating the railing to meet modern safety standards while maintaining the bridge’s historic appearance. Replicas of the original light standards based on historic photographs and postcards were also added to the bridge. The arch of the bridge has zinc anodes embedded to stop chemical corrosion for an extended period of time, helping to ensure the bridge will be able to serve the driving public for many decades to come. It received an Award of Merit (PDF) in the transportation category in the ICRI 2011 project awards program.