The Roosevelt Bridge carries 4th Street, formerly River Street, over the Cedar River in the city of Austin, Mower County. The bridge is a two-span barrel-arch structure built in 1933-1934. It is comprised of reinforced-concrete arches constructed on stone foundations and has stone masonry headwalls, abutments, and pier. The Roosevelt Bridge is significant for this unusual combination of concrete arches with a masonry substructure, and for the stone masonry workmanship reflecting the craftsmanship of multiple tradesmen involved with the project. The Roosevelt Bridge was designed by Mower County engineer Alan C. White and constructed by Mower County with funds provided by the Civil Works Administration. The CWA had a very short life, and the Roosevelt Bridge is significant as an extant, intact representative of this Depression-era program. 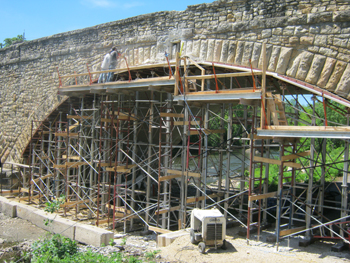 The Roosevelt Bridge was rehabilitated in 2011-2014. The rehabilitation followed preservation standards by replacing severely deteriorated components with new elements that match the original design and were based upon documented research. The material, construction methods, and form of the bridge were maintained. Deteriorated stone masonry was replaced by stones matching the original size color and texture in various areas of the abutments, pier, arch ring stones, spandrel wall, railing, and stringcourse. The rough-faced, random-coursed limestone railing was replaced with a new rail with crash-tested reinforced concrete core and stone veneer. Bridge lights and pilasters were reconstructed using historical photographs and drawings as a reference.