Bridge 5151 was built in 1931 and carries State Highway 19, also known as College Drive, over the Redwood River in downtown Marshall in Lyon County. It is adjacent to the Legion Field and park area. The reinforced-concrete, deck-girder structure has reinforced-concrete abutments with concrete-slab approach panels and a reinforced-concrete pier. The aesthetic treatment of the bridge is based on the design nearby Bridge 5083. As a result, the bridge was designed to include ornamental features, including Classical Revival light standards and concrete posts with recessed panels, as well as architectural details, including curved concrete floor beam ends, rounded piers and abutments, and recessed abutment panels. The concrete highway bridge is significant for displaying notable design aesthetics. 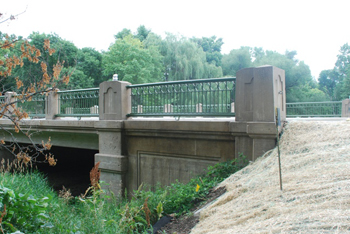 In 2012-2013 MnDOT initiated a rehabilitation project that included extensive concrete repair of approach spans and abutments. Concrete repair work followed two different methods. The first was form-and-pour, and was used for larger areas, such as the approach, wing walls, and piers. The second was concrete patching, used for the more minimal repairs to the concrete posts on the railing. Repaired areas were then stained to match the color of the remaining historic concrete.