Thank you to everyone who attended our Pavement Conference and Workshop this year. You made the meeting valuable, educational and successful.

The first day began with the workshops and continued out at MnROAD with tours, equipment demos and a BBQ picnic. This was a great opportunity to informally share ideas, stories and theories about the future of the industry. For example, our own Ben Worel was out on a MnROAD tour with some folks from Heritage Research. As they were talking, they gave him a new idea for drilling cores.

“I found the conference a model of collaboration between state DOTs, local transportation agencies and industry.  It allowed us to discuss common problems and potential solutions.  It also helped us to see where we can cooperate on common research areas.”
-- Joe Holland, Caltrans Pavement Research

When we moved the conference from February to May, we were hoping to have the kind of weather we got on Tuesday night.

“The NRRA Pavement Conference was a good opportunity for me to learn about technologies and research from peer states.  It gave me a chance to network and collaborate with counterparts in different states and from different firms. The presentations offered a variety of new research and implementation ideas and was well worth my time.”
--Barry Paye, WisDOT

The second day was punctuated by two keynote speeches, one by Chuck Schwartz and the other by Julie Vandenbossche. Together they wove a vision that celebrated the accomplishments of MnROAD. They both expressed the belief that MnROAD, supported by the NRRA, could have a great impact on our combined future. They stressed that collaboration on research involving all of the allies in the NRRA was a vital part of that future.

The conference was capped off by eight case studies that focused on the implementation side of the research equation. This reiterated in a demonstrable way what the NRRA and the annual Pavement Conference is all about: strategic implementation through cooperative pavement research. We look forward to seeing all of you, and more of you, next year as our alliance adds new members and breaks new ground.

Thanks to our Great Speakers

All of the powerpoint presentations from the 2017 NRRA Pavement Conference and Workshop are currently available on our website.

MnDOT began studying micro milling in 2013 on three highways. Early results have been promising and we just gathered the latest data for all three case studies.

Micro milling is a slightly counter-intuitive solution for rehabilitating a road. Normally, milling a road means taking a lot off the top surface and replacing it with new or recycled asphalt. With Micro milling, the surface is finely ground, not very deep, with a milling head that has more teeth that are closer together. This fine grind leaves a surface that is smoother.

In two of these cases, we added a chip seal and an ultra-thin bonded wear course. Because the milled surface is so smooth, we wanted to see how some of these surfaces would wear over time. Here’s what we’ve found and the latest measurements.

This was a 14-mile strip of pavement near Grygla, MN and it had an initial IRI (International Roughness Index) of 80 in/mi. The pavement had cupping of a transverse crack. Right after the project was completed in 2013, the IRI for the road was 64 in/mi.

This highway near Motley, MN was micro milled and micro surfaced in 2014. It then received an asphalt emulsion with a higher polymer loading and higher application rate to reduce reflective cracking. This increased the price of the project by about 30 cents a square yard over a typical micro surface project. All told, the cost of this project was $60,000 per center line mile.

The initial IRI was 166. After micro milling and micro surfacing:

MnDOT did this stretch of highway in 2014, and after micro milling, it received an ultra-thin bonded wear course (UTBWC). This road had an initial IRI of 110 in/mi. The cost per center line mile for this treatment was $85,000. The results are:

As of now, the results of micro milling are encouraging. Time will tell how cost effective it is in terms of rehabilitating roads and preserving pavement.

Help us welcome a new Associate Member, ASTEC/CEI Enterprises from New Mexico. It's representatives will be on the Rigid Team. 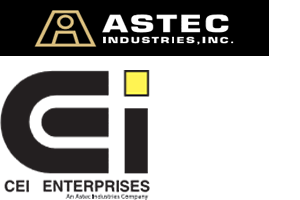 Knowing how pavement moves is part of the whole picture that involves good design, good construction, good materials and good research. MnDOT and MnROAD went out on a limb to develop and begin to implement video for digital image correlation to find out what happens to pavement when you drive a vehicle over it.

Digital image correlation has been around for years, explains Amy DiRienzo, staff engineer at RESPEC, a construction consulting firm that provided the software, training and equipment for this research project. The concept is pretty straightforward. You take a video camera, or more than one, and shoot video of a section of pavement or a bridge or any structure, and then have some very advanced software examine targeted pixels within the video and measure how each pixel moves.

Capturing the movement of structures on video has been around a long time; the first use was the Tacoma Narrows Bridge in the 1950s. What has changed is the processing power of computers and the software developed to do analysis. It’s gotten much, much better. That opens up the potential to measure a lot of things.

As DiRienzo explained in NRRA-sponsored webinar on June 6, a lot of the digital image correlation work has been done on bridges and railroad tracks, much of it overseas in England, where many of the digital image correlation systems for this work are being manufactured. What’s groundbreaking about MnDOT’s work is how much camera and computing power we are employing to measure pavement movement.

When DiRienzo’s company measures a railroad bridge, for example, it’s pretty easy to see and measure the movement. The movement is large and dramatic and it takes some time for everything to settle back into place after the train is gone. In such a case, RESPEC might shoot with a frame rate (frames per second) between 20 and 100. To give some perspective, regular video is about 30 frames per second. The more subtle the movement of the structure, the higher the frame rate required.

MnDOT however is measuring very subtle movement of pavement that snaps back into place very quickly. Consequently we are using a frame rate of 1,000 frames per second with a 2 megapixel camera. We are also using multiple cameras, which isn’t a common practice. The amount of data all of this generates is monumental, even by today’s computing standards. That’s why this project gets labels like “cutting edge” and “ground breaking”. No one has tried to push this technology that hard, at least here in North America. It’s also why we have worked so closely with RESPEC on the software, which is constantly evolving to handle the pressure we are putting on it.

This system is very adaptable to different applications, and MnDOT is finding lots of ways to use it. In addition to measuring pavement deflection under loaded trucks, we are also using it to measure curl and warp in concrete pavements to understand the environmental changes that take place every day. It also is being used to calibrate strain gage sensors  that are used at MnROAD.

The advantages of this system, especially over other common systems that are used to measure the rapid motion of structures, are many:

One major challenge in using this system outside of a laboratory has been the effects of changing light conditions on the structure being measured. This can be caused by shadows from passing clouds, to reflection off water under bridges. Improved features like auto-exposure for the video camera should help to minimize such issues in the future.

This will be the second year we take our digital image correlation technology out of the lab and out into the field—measuring movement of both bridges and pavement. Steve Olson, Research Pavement Senior Engineer Specialist at MnDOT, has been doing a lot of the calibrating and testing and tweaking of this system.

As we enter Phase III of construction for MnROAD this summer, we are committed to providing weekly summaries of the progress including: photos, videos, spreadsheets of the schedule and descriptions of what is being accomplished. Our first update is live. Follow us on Twitter and Facebook to find out when the next update gets published.