In 1916 the Chicago, Milwaukee and Saint Paul Railroad constructed a series of bridges to separate railroad traffic from city streets. The bridges are identical in plan, dimension, and ornamental detail. Each structure is a three-span, cast-in-place, reinforced-concrete T-beam that rests on round-arch piers. The railings, parapet walls, and wingwalls feature modest Classic Revival details, including ornamental recessed panels and pilasters. Beginning in 2000 the rail lines were removed and the grade separated corridor was converted to a recreational trail, known as the Midtown Greenway, and maintained by the City of Minneapolis. 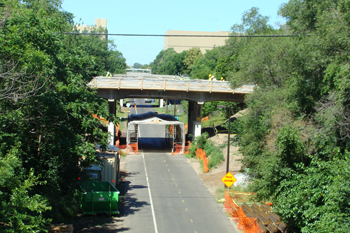 Rehabilitation work was conducted in 2013 to address deterioration of bridge components. To reinforce the superstructure, precast concrete panels with supporting corbels were installed. The concrete abutments and parapet walls were repaired, and a new tubular steel and cable railing was installed on top of the parapet walls.