First off, thanks to every attendee, every speaker and everyone involved in bringing this year’s workshop together. It was three days of valuable presentations, exciting discussions and engaging demonstrations. Here are the highlights.

Day One
We added this day a few months back, not knowing what might happen. The whole day was dedicated to presentations and discussions of using Building Information Modeling (BIM) in road construction. It was conceived as an overview, but it quickly evolved into a challenge to the pavement industry—including state DOTs—to start using the tools provided by BIM. One of the highlights came when three vendors got up in the afternoon to talk about BIM and how it is changing construction in Europe and how it could potentially change the way we do work in the US.

This was the kind of interactive presentation you don’t encounter very often at conferences. The three presenters collaborated on the talk and it was very evident, presenting case studies, working the crowd and demonstrating deep knowledge about what really happens at a construction site. This was even more exceptional because the three presenters—Kelly Steeves (Leica), Jim Preston (Topcon) and Allistair Wells (Trimble)—all represent competing organizations. They talked about how much collaboration was required in BIM, and they demonstrated that collaboration in their presentation.

The rest of the afternoon proceeded in the same vein, with a panel discussion that could have gone well into the evening if they hadn’t kicked us out.

This day was designed to be interactive, with presentations in the morning and then a trip up to MnROAD in the afternoon. The morning featured each NRRA team leader giving an update on their teams activities and highlighting the breakout sessions later in the day (and also on Day 3 of the workshop).  When we got to MnROAD, attendees could get a tour of MnROAD or they could tour the two FHWA trailers that were on site. It’s pretty rare to get both trailers, the Mobile Asphalt Testing Trailer and the Mobile Concrete Technology Center, at the same location at the same time. Each trailer had formal tours and demonstrations. When you added in the MnROAD tour of our recent test sections, it was a very full afternoon.

The day ended with a reception at the Caterpillar Paving Products showroom. Attendees got to see the latest equipment and, more importantly, climb all over it. Caterpillar was a gracious and generous sponsor of the reception, and we can’t thank them enough.

Day Three
This was the more formal day of presentations with keynotes by Becky McDaniel and our own Ben Worel. Some great testimonials about MnROAD and NRRA came from Amy Beise, NDDOT Materials & Research, and Zhanping You, Professor of Transportation Engineering and Materials at Michigan Technological University.

Near the end, right before the group broke up into concurrent research tracks, our Director Glenn Engstrom was presenting on the future of our alliance. He showed a video of the Indianapolis Motor Speedway, which he had recently visited. He wondered aloud what kind of pavement they had constructed to handle those speeds. Our keynote Becky pointed over her shoulder and said “why don’t you ask Gerry? He wrote the spec for it.”

It turns out Gerry Huber from the Heritage Research Group was, indeed, in the audience, and he had designed the pavement for the Indianapolis raceway. Director Engstrom relinquished the podium and microphone, and Gerry explained what was in the pavement at the legendary racetrack.

There were, of course, other highlights, but we can’t cover them all. Maybe the most important highlights happened quietly and individually, when an attendee came away from a presentation or discussion with an idea for a solution that he or she could take home and implement right away. One attendee said to us “You’ve raised the bar very high this year. How are you going to top it next year?” Stay tuned and thanks again for your participation in NRRA.

We have almost all of the Powerpoint decks from the Pavement Workshop up on our webpage. Thanks again to all the speakers.

As MnDOT continues to pursue building thinner concrete pavements, the design and performance of the pavement can change.  One such feature is sawing the concrete into 6’ by 6’ panels and eliminating the dowel bars, which has caused some faulting of the smaller panels.  The solution MnDOT has been testing through MnROAD and NRRA has been the addition of macrosynthetic fibers to the thin concrete pavement.
Previous research at MnROAD has shown that fiber reinforced concrete pavement contraction joints at MnROAD were not cracking (“activating”) as frequently as non-fiber reinforced concrete.

MnDOT has seen non-fiber reinforced concrete joints activate every 60 feet (typically every 4th joint when spaced at 15 feet) hopes to see the same or increased joint activation pattern in fiber reinforced concrete.  When the joints crack every 60 feet, it creates working joints that are wider than the in-between joints.
The University of Minnesota Duluth recently completed a project funded by MnDOT and the Local Road Research Board to find the optimum structural fibers for use in thin concrete overlays.  Maria Masten, Concrete Engineer for MnDOT, says the most important finding in the report is the importance of keeping all of the joints in the fiber reinforced concrete pavement narrow to maximize the value of the added fiber. That’s why joint activation was particularly important. 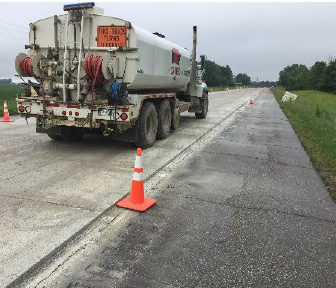 MnDOT constructed a 16-mile long project last year on Hwy 63, northeast of Rochester, that involved whitetopping a stretch of road with fiber-reinforced concrete. The whitetopping was 5 inches thick, and the joint spacing for the project was 6’ by 6’ panels. The concrete mix had macrosynthetic fibers incorporated at a rate of 4 pounds per cubic yard.   This was the largest fiber-reinforced concrete project in Minnesota, and both industry and MnDOT felt this was an excellent opportunity to try and activate as many joints in the concrete pavement as possible.

“The goal is: instead of just letting the pavement crack where it wants to and make wider joints, our hope was that we would get more of the joints to crack, if not all of them,” she said.

With the approval of MnDOT District 6 Materials and Rochester Construction Offices, MnDOT worked with the contractor, Croell, Inc., out of Iowa, to load the pavement to optimize joint activation. Normally, she says, a 5-inch whitetopping would be loaded when the concrete reached a flexural strength of 500 psi. Depending on temperature and other factors, that could be two to four days after paving.   Croell opted to use maturity to determine the in-place strength of the concrete, which allowed them to load the concrete at earlier ages.
Croell made four passes with a half-full water truck at about 72 hours/500 psi on the initial test section. There was little evidence of joint activation, so they used a full water truck with a similar results. They tried loading earlier with four passes, at 24 hours when the concrete strength was about 350 psi based on maturity measures. They saw an increase in joint activation, but still not where they wanted it.

They tried to load it right after all of the joints were sawed at approximately 14 hours/150 psi flexural strength. That’s when they got the best results—loading the fiber reinforced concrete right after sawing with a fully loaded water truck. Masten says they got joint activation at a rate of one out of every four to six joints.

The results were good enough that the contractor continued with that method for the rest of the project on Hwy 63. Due to the success on this project, Winona County decided to add fiber to its 5-inch whitetopping project on Winona CSAH 25 and agreed to load the pavement early to induce joint activation. Croell drove a fully-loaded water truck on the pavement at 12 hours and 24 hours after pavement placement.  They saw similar results as the TH 63 project.

MnDOT will use the MIRA device this summer to go out to TH 63 and CSAH 25 and measure the joint activation in several sections of the pavement to see if additional joints have cracked.

Maria’s presentation on this project at the National Concrete Consortium this spring.

At the May Pavement Workshop, Ben Worel showed one of the tools of the things we are investigating to allow us to show you what's going on at MnROAD. This is a preview of a virtual tour he showed in his presentation. It's an eight-shot tour of Cell 33. Let us know how you like it. Better yet, let us know which cells we should do next.

June's webinar will feature Gerard Moulzolf from AET speaking on 100-year old concrete. Please join us on June 18 at 10 a.m.