Brett Trautman, Physical Laboratory Director for the Construction and Materials Division at the Missouri DOT, 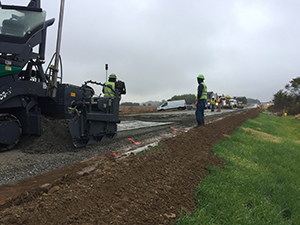 is also the chair of the Rigid Team. This year MoDOT was paving a two-mile section of road using compacted concrete pavement. “Since we are going to build it, is there any way that some of the funds that were going to be used for the research, could they be allocated to the work being done in Missouri?” asked Trautman. The proposal went to the Executive Committee and was approved.

On October 23, the contractor ran a test strip. Then the project went into full production October 24-26. MnROAD sensor installation experts Len Palek and Steve Olson arrived from Minnesota and were on site to instrument 3 test sections on the project. These will be monitored for long term performance, with assistance from Missouri S&T.

The key to compacted concrete, he says, is the mix. “Moisture control is everything,” said Trautman. If there is too little moisture it won’t compact; if there’s too much, it slumps.

The section being paved was a two-mile service road that ran along Hwy 55 south of Scott City. The test sections were in the southbound lanes and consisted of:

Overall, Trautman was satisfied with the way the pavement went down. “Considering it was the [contractor’s] first time doing it had visions of this being a complete mess,” he said. A few years previous, Missouri did a roller-compacted concrete project that was just shy of a complete disaster, and his expectations were cautious.

A couple of “learning moments” occurred during the paving. For example, they learned as the mix was transported from the conveyor belt to the hopper of the paver, larger pieces would end up on the far side while the fines were landing on the side nearest the belt. Getting the mix correctly incorporated was a challenge.

They also got some wet sections once the pavement was down, and some wet areas even exhibited a bit of slump. This was designed to be a zero-slump mix. 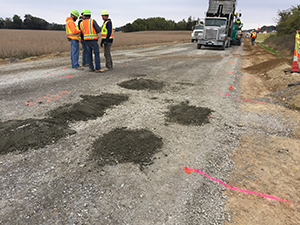 They were also using stringless paving for this project, so the paver was being guided by telestations. On the second day, it rained, so controlling the moisture in the mix was complicated. Then the paver lost its connection with the telestations. According to Trautman, when that happened the screed just dropped.

They only had to remove about 70-80 feet of the project because of this glitch.

The NRRA got involved in the research of these test sections by funding the sensors and sending a team of experts down to Missouri from MnROAD. Steven Olson, Research Project Specialist, and Len Palek, MnROAD Project Engineer, drove down to the project and helped with sensor installation. The trick with this project, explained Trautman, is that embedded sensors typically depend on the concrete flowing around and under them during paving. Since this mix had no real flow, the sensor team had to get creative. They packed the sensors—strain gauges, joint sensors, temperature sensors--with the mix on all sides before the paver came through.

All the sensors survived and data is being collected (via modems) and stored in the MnROAD database for use by the researchers.

After the pavement was down and rolled lightly, they applied a proprietary product called ACEiT Blue. ACEiT Industries is the company that provided the compacting and molding additive that reduced water and stabilized the moisture of the mix. The ACEiT Blue was, according to Trautman, an oily film that was sprayed on the compacted concrete to help them finish it. He said, “when you look at the final surface it looks like a concrete that’s been broom finished.”

They finished with a curing compound and early-entry D3 sawing. Missouri doesn’t use a sealer for concrete pavements. Overall, they achieved 98 percent density consistently behind the paver.

The fiber-reinforced test section got special attention. Several weeks before the paving, Trautman’s team did some trial batching to determine the fiber dosage they would try: 4 pounds, 5 pounds and 6 pounds per cubic yard. They decided to aim for the middle with 5 pounds.

Trautman is hoping the fiber will enhance the load transfer at joints because they couldn’t use dowel bars with compacted concrete.

In terms of performance testing, students and a professor from the Missouri University of Science and Technology were on site. They molded several beams and cylinders from the mix. MoDOT also molded some beams and cylinders, but it also cut some out of the test sections. They will test these against the molded samples for flexural strength, residual strength and freeze/thaw durability.

Trautman says this project is about testing compacted concrete with the hope of adding to the toolbox of options Missouri pavement engineers can draw from. Back when asphalt prices were high, the economics of compacted concrete began to get the attention of contractors. Current asphalt binder prices are making folks take another look at compacted concrete. It won’t be for every project, but it might work for certain circumstances. He says some counties and cities might find it attractive because you can get concrete project but still use a smaller paver. It might also be good, he says, for some interchanges that are prone to rutting.

The future of compacted concrete is still up for grabs, and that’s why the research done in Missouri will be so important. Currently Louisiana, which also did some pilot projects years ago, is looking to create a pooled fund for compacted concrete use in highway projects.

“This project was ground breaking for the NRRA because it was not located at MnROAD, and it demonstrates the flexibility and power of our alliance. We hope other states will look at their upcoming test sections to see how our teams can help them implement and monitor these projects. We need to export the expertise of the NRRA to all of our members and our members-to-be,” said NRRA Director Glenn Engstrom.

For more information on this project, contact the NRRA or go to the Rigid Team Page.

I have been around MnROAD since 1992 when I was a graduate engineer in MnDOT’s Concrete Office while it was being constructed.  Since then many great things have been done at MnROAD, too many to discuss in this short article.  MnROAD has been, and continues to be, a treasure for us in Minnesota because it is an experiment in which we are allowed and expected to fail so that we learn what to do and what to avoid.  As Tom Burnham once noted, it is a place for Matt to try his crazy ideas.

Some of the crazy ideas over the years have included thin concrete overlays, fiber reinforced concrete (overlays and on grade), and low cementitious concrete mixes. All of these have been implemented in one way or another in actual projects in the past few years. 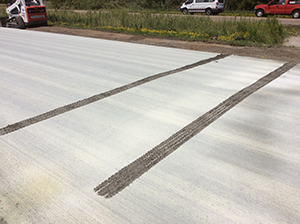 concrete really needs to be before opening to traffic.

In 2017 a test section was developed to run a 31,000 lb. tandem axle snowplow truck and a 9400 lb. pickup truck down the test section at varying times to evaluate how the concrete responded and to document any premature deterioration due to the early loads.  Amazingly, the concrete showed no visible damage after allowing the snowplow to begin driving on the concrete after only three hours. Here is a YouTube video showing the loading.. Initial strain on the first day was significant but repetitions on the subsequent days showed very low strain.

We were also given the opportunity to purposely rut the concrete by driving the pickup truck across the concrete at an even younger age and then study the ruts over time.  https://www.youtube.com/watch?v=ZyNy2UA9mSs

In 2018 we tried a similar experiment on full- and partial-depth concrete repairs as well as some roller compacted concrete.  Again, these repairs were loaded at about three hours after they were placed.  The only visual effect was that some of the curing compound was tracked by the vehicle. https://www.youtube.com/watch?v=fn-bd4RVXWQ . In both experiments, non-destructive evaluation will continue diligently for a few more years to expose any potential for long-term damage.

During the 2018 construction season we used some of the information we have learned at MnROAD to better serve the traveling public and to better build our pavements.

On another concrete overlay project, the contractor, in conjunction with the contracting agencies, drove a fully-loaded water truck (approximately 50,000+ lbs.) to help induce the sawed joints to activate.  The process was successful in activating more joints, and there was no visible damage to the concrete pavement.

While there is still research to be completed, available observations and an abundance of evidence indicate that we will in the near future be opening concrete pavements earlier to traffic. If designers know they can get their residents home and provide access to their businesses after only a day or so, the benefits of choosing a long-term concrete pavement solution becomes even easier.

NRRA and MnROAD are looking for more ideas to try in 2019.  I am sure I will have many more ideas, and I encourage anyone involved in NRRA to submit ideas.  You never know how we can change the world.

We have one new Agency Member and five Associate Members to welcome. North Dakota Department of Transportation is our new Agency Member. Our new Associate Members are the University of St. Thomas, Hardrives, Leica Geosystems, Trimble and MOBA. They will have team members on the Flexible Team, the Rigid Team, the Technology Transfer Team and the Intelligent Construction Team. Welcome all.

Summary: The use of permeable pavement is increasing as a means to reduce stormwater runoff, pollutants, recharge aquifers, and create a more resilient, less flood-prone environment. Most permeable pavements are porous asphalt, pervious concrete, or permeable interlocking concrete pavement (PICP). This research was borne from the need to validate structural design methods for PICP developed in 2011 by the Interlocking Concrete Pavement Institute. The presentation details the research undertaken in 2014 to develop revised design tables for PICP using a mechanistic-empirical design approach. The presentation reviews the study, which included:

The study developed design tables based on a specific number of target days with standing water in the subbase or on a range of days. The design method and tables were adopted by Caltrans in 2016 for their Pervious Pavements Design Guidance. They were also published in 2018 by ASCE in a national standard, ASCE/ANSI 68-18 Permeable Interlocking Concrete Pavement.