In September, Cargill is partnering with MnROAD to install some test cells using their rejuvenator Anova. At the beginning of August, they did a project in the town of Hopkins, MN, that is a preview of the work they will be doing at MnROAD.

As in the above example, MnROAD is looking for opportunities to expand our partnerships. Ben Worel, research operations engineer for MnDOT, says MnROAD and the NRRA must "Foster partnerships to encourage innovation of new ideas, and to do that we can’t always do things the normal way.”

Partnerships with Cargill and Diamond Surfacing are “two examples of ways we’ve been able to support innovation related to the construction of test sections that don’t always fit into the traditional processes MnDOT uses. MnDOT was able to enter into written partnerships with industry to incorporate new innovative paving materials/practices that allow industry innovation to produce as good-- or better--performance but also saving dollars as compared to the original engineering estimates. It’s not costing us more, it’s costing us less—and it allows for that innovation” adds Worel.

I you have ideas for innovation or future partnerships using MnROAD please use the following process:
1. Email MnROAD the initial idea.
2. MnROAD staff will contact you and discuss your need in more detail

This annual meeting will be held in Minnesota on Sept. 25 (at Pease and MnROAD) and Sept. 26 (in Bloomington, across from the Mall of America). The very-full agenda is live, and we look forward to seeing many of you there.

Jerry Geib, Research Operations Engineer for MnDOT, will be leading the tour and discussion up on Hwy 169 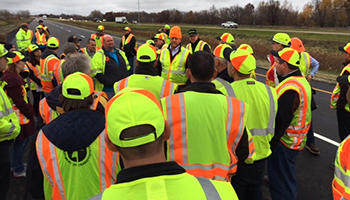 and CSAH-8 in Pease, Minnesota. He will be focusing on test sections with different chip seal applications and discussing their performance. For example:

All of the chip seals that included microsurfacing appear to be doing well and Geib says they will most likely “hang in there for a long time.”

At the MnROAD test sections, not a lot has happened after one mild winter and one normal winter, says Dave Van Deusen, MnROAD Operations Engineer. He’s seen some distress but it may not be temperature related. There is no evidence of transverse thermal cracks.

The performance testing on the MnROAD sections is the big story this year. All the mixes are undergoing critical aging, and it will be a challenge to get all of the samples aged in time. Van Deusen is aging 8 mixes--3 buckets of each, each bucket weighing 50 pounds—so oven space is at a premium. Once aged, all the performance tests done on the samples in Year One will be repeated this year.

This meeting promises to further the dialogue and partnership created by NCAT and the NRRA/MnROAD and continue the discussion on the implementation products needed in the upcoming years. As such, it’s importance to the future of the paving industry cannot be understated. We hope you can join us.

We measure a lot of factors at MnROAD: time, temperature, strain, movement - but it would be difficult to measure the impact that Jack Herndon, site manager for MnROAD for 23 years, has had on our research facility. He has been a mainstay and a cornerstone in all the work and tours and learning and research that has occurred here. He retired on Aug. 7, and we will miss him.

Herndon had been with MnROAD almost since the beginning, filling his newly created role in 1995. He had been working for MnDOT’s Office of electronic communications when the job opened up. He applied and got it and, said Herndon, “each day was a new challenge.” 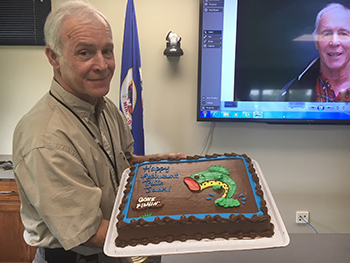 Throughout his tenure, managing MnROAD has been a case of moving from research project to research project.  It always seemed to him that every time one project ended, two more took its place. It didn’t take him long to realize, because of the research being done, that his job was on the forefront of the future of transportation—that he and MnROAD were making a real difference.

Herndon’s work experience before he came to MnDOT and MnROAD was very international in scope. His career included work for General Electric, the Ramco Group, the Saudi Ministry of Aviation, the Egyptian Suez Canal Authority and the Egyptian Electric Authority.

During Jack’s stewardship of MnROAD a lot of graduate students have spent weeks, months and even years at the research facility. Many have gone on to become leaders in the pavement industry, including NRRA members Eshan Dave (University of New Hampshire) and Julie Vandenbossche (the University of Pittsburgh). “I always considered that to be one of the most important things--we were contributing to the development of future leaders in pavement and intelligent transportation and environmental sciences,” said Herndon.

MnROAD has hosted many national groups, but the international visits make it a pretty exciting place to work. As site manager, Jack was instrumental getting the site ready for tours and hosting international delegations from Australia, South America, Russia, China and more. Most recently he helped with the autonomous bus testing at MnROAD, the first cold-weather testing of autonomous vehicles. The bus, created by a French company, went on to be featured at the Super Bowl in the Twin Cities in February 2018.

Along the way, Herndon says that one of the remarkable aspects of his job and the research at MnROAD is everyone’s willingness to chip in and help out when needed. As well-planned as the research is, he said, there are always unexpected things that come up—it’s the nature of research. Nevertheless, students and international visitors and contractors and academics all seem gracious with their time and eager to pitch in.
He singled out the MnDOT workers from District 3 in Central Minnesota for his gratitude. “They were always there. We could count on them to be able to do the things that we either didn’t have the equipment to do or we didn’t have enough resources to be able to do it,” says Herndon.

What did he learn along the way? Herndon isn’t sure yet. He suggested that some time—a long time perhaps--on a beach somewhere would be very beneficial in sorting out all he learned.

“I don’t think I learned as much in school as I did every day on the job,” said Herndon.

Please join us for these upcoming webinars.

Summary: In a recently completed TxDOT research project, research team from UT Arlington studied the use of unmanned aerial vehicle (UAV) with close range photogrammetry (UAV-CRP) technology to perform infrastructure health monitoring and performance assessments. A multirotor UAVs was used in these studies. This research also assisted in developing standard operating procedures, including operational procedures, flight operation manuals (FOM) for Texas DOT. Before collecting infrastructure data, a comprehensive set of calibration procedures were conducted on the total system comprising of UAVs and different accessories. After the checks ensured the required accuracy for the project, UAV-CRP was used to assess the condition and management of pavement and bridge infrastructure as well as rail corridors. All these successful UAV-CRP applications can provide ways to assess distress and infrastructure characteristics that are needed in annual infrastructure rating surveys. Stockpile volumetric assessments and other infrastructure studies showed that UAV-CRP can provide data that is in agreement with traditional methods.

Nov. 20--NRRA Teams Review 2017 projects one year out (the time of this webinar will extend beyond the traditional hour to accommodate all the teams and information)