Scott Holmes had a problem with County Highway 22. Heavy trucks were wearing out his road much sooner than he expected.

Holmes is the transportation supervisor for Olmstead County Public Works in Minnesota, and the road he recently constructed wasn’t performing as predicted. His concrete overlay from 2011 was already showing signs of joint faulting only a few years later. He suspected that the heavy traffic from a new industrial site nearby was doing the damage.

This was already a busy road. It was originally a full-depth 14-inch bituminous roadway, but when the county decided to repave it due to rutting, they went with a concrete overlay. They milled 6.5 inches off the top and put down a portland cement concrete (PCC) overlay without dowel bars at the joints. With the solid bituminous base, there didn’t seem to be any need for more support.

As the ride deteriorated due to faulting, the public began to complain about the poor ride quality. The only thing that explained it, says Holmes, was the very heavy loads being hauled to and from the industrial site.

His next move was to contact MnROAD in 2015 and have the researchers there do some in-depth analysis. Tom Burnham from the Materials and Road Research Lab at MnDOT examined the road using both ground penetrating radar and the new high-speed digital correlation system. In the report, he wrote “Good load transfer would be depicted as having fairly equal deflections on both sides of the joint.” Instead he found very little load transfer (see figure below): 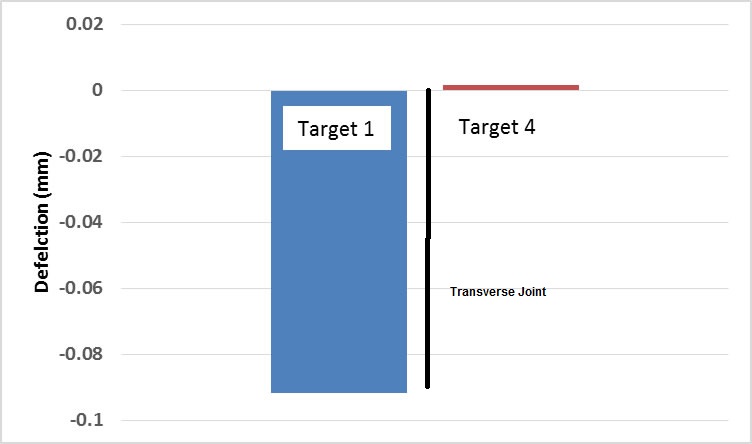 Deflections across a transverse joint, as measured by Video Gauge, for a passing truck. Axle load was over Target 1, Target 4 was on the neighboring slab.

Holmes considered smoothing the ride by diamond grinding the surface alone, but decided that would only last a couple of years. He needed something that had more long-term potential, so he went with the dowel bar retrofit technique. He had had good experience with that solution in the past. After further consulting with MnROAD staff, he decided to put dowels across the transverse joint in the panels, three in each wheel path.

He was a bit concerned about cutting too deep in the 6.5 inch PCC surface and hitting the bituminous underneath, thus reducing the additional support the roadway needed. After consulting with the Minnesota Concrete Paving Association, he decided to go with smaller one-inch dowels across the joints.

Following installation of the dowel bars, the entire surface of the pavement was diamond ground to restore ride quality, thus extending the service life of this road for many years.

Conventional wisdom would say that performing the dowel retrofit on this road would be more expensive than installing them in the original rehab. Holmes isn’t so sure. It might have been slightly cheaper, he said, but in this retrofit he isn’t using dowels or baskets throughout the whole slab. Instead he is using fewer dowels to maximize their effectiveness.

Help us welcome a new Associate Members 3M and North Dakota State University Upper Great Plains Transportation Institute. It's representatives will be on the Tech Transfer Team and the Flexible Team. 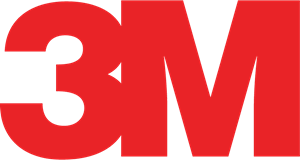 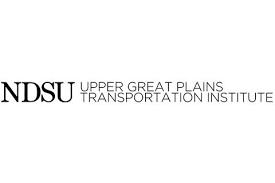 This is an important summer with all of the construction going on out at MnROAD, so we are helping you keep up with the progress on a weekly basis. The updates describe each week with photos, updated schedules, videos and a look ahead at the rest of the construction season. The best way to learn about the updates is to follow the NRRA on Twitter or Facebook and LinkedIn. Updates will be posted on both sites.

MnROAD has had more than a decade of experience with pervious pavements, both concrete and asphalt. These pavements allow water to drain through it rather than running off to either side. Technically, pervious concrete is made up of 20-24 percent communicating cavities that allow water to flow through pavement into the porous base and subgrade. 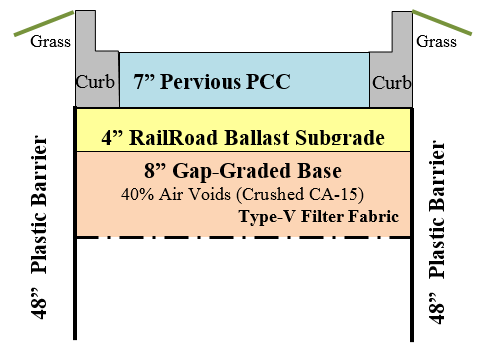 MnROAD’s first pervious concrete test cell was built in the MnROAD parking lot (Cell 64) in 2005 through a partnership with Aggregate Ready Mix of Minnesota. Four mix designs were evaluated in the parking lot. In 2007 additional mix designs were tested in the sidewalks leading into the MnROAD main building--to help develop a durable mix and work on installation standards. In 2008, MnROAD was ready to install full two-lane 220’ test sections (Cell 85 and 89) on the low volume road along with a 500’ two lane section (Cell 39), also on the low volume road. This last one consisted of a concrete pervious overlay with concrete designed by Iowa State University.

Our conclusions about concrete pervious pavements are as follows:

We have also installed a couple of pervious surfaces in other areas around the state. Shoreview, MN, constructed 3,000 feet of pervious concrete in 2009. It has 8 inches of pervious concrete on top of a 1 foot base of railroad ballast. So far one acre-foot of water (325,851 gallons) has passed through the surface of the road, and it’s holding up well. Because it eliminated hydraulic structures to handle storm water runoff, the cost benefit analysis of this road is positive.

Another pervious surface was constructed in Detroit Lakes, MN where it was used on a boat landing on Detroit Lake. In this case the filtration effect of the pavement was its primary benefit.

The pervious test cells at MnROAD were excavated during this summer’s 2017 Phase III Construction. A report on the forensics of the material will be out early in 2018.

Thanks to Bernard Izevbekhai, Research Operations Engineer for MnDOT, for his synopsis of pervious results that this article is based on.

August 15: Super Air Meter with Tyler Ley, Oklahoma State University, Williams Foundation Professor of Civil and Environmental Engineering. You can view a recording of the presentation at the Research Pays Off website.

As always, we are eager to hear from you about future topics for this webinar series. Please forward this invitation to others in your organization who might benefit from the material presented.