What is a zipper merge? 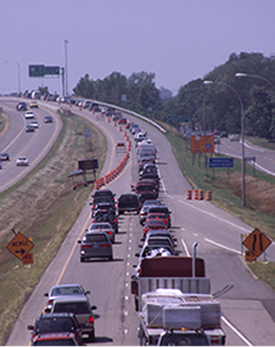 When a lane is closed in a construction zone, a zipper merge occurs when motorists use both lanes of traffic until reaching the defined merge area, and then alternate in "zipper" fashion into the open lane.

When most drivers see the first “lane closed ahead” sign in a work zone, they slow too quickly and move to the lane that will continue through the construction area. This driving behavior can lead to unexpected and dangerous lane switching, serious crashes and road rage.

Zipper merging, however, benefits individual drivers as well as the public at large. Research shows that these dangers decrease when motorists use both lanes until reaching the defined merge area and then alternate in "zipper" fashion into the open lane. Watch a brief video about how it works.

So I'm supposed to merge late?

Yes! As you see the “lane closed ahead” sign and traffic backing up, stay in your current lane up to the point of merge. Then take turns with other drivers to safely and smoothly ease into the remaining lane. Don't worry about being "Minnesota nice." When traffic is heavy and slow, it is much safer for motorists to remain in their current lane until the point where traffic can orderly take turns merging.

When not to do the zipper merge

When traffic is moving at highway speeds and there are no backups, it makes sense to move sooner to the lane that will remain open through construction. The bottom line is to merge when it is safe to do so.

“Raising awareness for motorists to use the zipper merge in construction zones will help reduce crashes, speeds and congestion.”