MnDOT consistently scrutinizes concrete paving specifications to ensure a good riding surface is achieved after a great mix design and careful placement of the concrete pavement. In 1988, some pavements in the state were reportedly noisy. This led to a moratorium on the pre-existing method 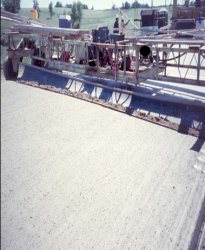 of finishing known as “tining” and initiated the challenge to develop a finishing method that minimizes noise without compromising friction. This led to the innovative use of Astro-turf drag for finishing concrete pavements. Recently, the latest Federal Highway Administration T5040.36 of June 17, 2005 (on pavement texture) itemized this as a concrete pavement texturing technique with the proviso that safety performance is demonstrated.

MnDOT currently specifies a standard finishing texture depth of 1 mm on concrete pavements. This texture can be achieved using several techniques. One technique is to drag burlap fabric behind a paver over a newly paved surface. As mentioned previously, another technique is “tining”, which is achieved by dragging metal prongs on semi-hardened concrete pavement to create grooves longitudinally or transversely. Many older concrete pavements in Minnesota were finished with a combination of burlap drag and transverse tining. Other texturing techniques include broom finish and diamond grinding. The broom finish can sometimes be difficult to apply, as the surface of the fresh concrete often tears during the process. Diamond grinding can be used both as a texturing method and a correction method for bumps. It is performed once the concrete has hardened sufficiently. A typical diamond grinding is characterized with parallel 1/8” X 1/8” grooves at 1/8” intervals. The current MnDOT standard for creating texture in concrete pavements is by using the Astro-turf drag method. Astro-turf drag is created by dragging an inverted strip of Astro-turf behind a concrete paver after the smooth finishing operation and before the application of a curing compound.

To insure that MnDOT’s current concrete pavement texture depth standard is being achieved, a basic texture test is carried out during construction. The test is conducted shortly after the textured surface has hardened, and consists of pouring a known volume of small glass beads onto the surface and spreading it in a circular pattern with a flat smooth disc. As the glass beads are spread, they fill the low spots in the pavement surface. When the beads cannot be spread any further, an average diameter of the resulting circle is measured. An average texture depth is calculated from this diameter and correlated to skid resistance. If the texture does need meet specifications, the contractor is directed to diamond grind the affected area and immediately adjust the on-going Astro-turf drag operation.

Astro-turf drag not only reduces noise, but also has a high contact area between the pavement surface and a tire. The long-term durability of this contact area is important for maintaining tire-pavement friction standards. So far, monitoring of the Astro-turf drag texture by MnDOT has shown no short-term reductions in texture depth. Monitoring will continue to insure this is a reliable technique for providing safe and quiet concrete pavements in Minnesota.

For additional information on the research results or for the full report, please contact:
Bernard Izevbekhai at 651-779-5608.