Cable median barriers can reduce fatal crashes by 95 percent. There is no other safety device available that virtually guarantees consistent success in saving lives every year on the interstate system.

Since the first installation in 2004, cable median barriers have saved approximately 80 lives in Minnesota to date.

The barriers are made of three or four steel cables strung on posts. When a car hits the barrier, the posts break and the cables flex, absorbing much of a crash’s kinetic energy. This redirects the vehicle along the median, preventing a cross-median crash.

When a vehicle hits a section of cable barrier, maintenance crews can repair the damaged section quickly. The barriers are carried on steel posts that slide into buried sleeves. If the barrier is damaged, the posts slide out easily to allow a new cable section to be installed.

In addition to the ability to lessen crash severity, the cable barriers cost less than permanent concrete barriers. The barriers are usually installed in highway sections that include entrance and exit ramps that lead to traffic weaving or a change in the number of lanes that can result in crashes or near-crashes.

As traffic volumes have grown, Minnesota has experienced an increase in cross-median crashes. Installing cable median barriers in strategic locations is an effective method to prevent these often tragic crashes.

Cable barrier in the news

You may have heard about high tension cable barrier in the news recently. HTCB has proven to be one of the most effective tools available to transportation engineers for reducing fatal and life-changing cross-median crashes. Here's some more in-depth background:

MnDOT implemented a Toward Zero Deaths Program in 2003. This program is a partnership between the Minnesota State Patrol, the Minnesota Department of Health and MnDOT in which we work together and with local safety partners to reduce fatal and serious crashes on Minnesota roadways. Since 2003, we have seen a reduction in highway fatalities from 655 deaths in 2003 to 395 deaths in 2012. HTCB is one of the engineering tools that have helped us reduce deaths and life-changing crashes.

HTCB was first installed in Minnesota in 2004. Since that time, it has proven to be 95 percent effective at reducing Minnesota fatal and life-changing crashes caused by vehicles crossing the median into oncoming traffic. Similar results have been found in many other states, as documented in the National Cooperative Highway Research Program Report 711 completed in 2012.

MnDOT estimates that over 100 lives have been saved since HTCB was first installed. MnDOT acknowledges that there is an increase in property damage crashes associated with HTCB near the roadway edge. We believe this is an acceptable risk given the effectiveness of the cable at preventing fatal and serious crashes.

HTCB is one of the most versatile and forgiving barriers built. It is designed so that when struck, the posts break and the cables flex to absorb the vehicles kinetic energy and redirect the vehicle along the barrier. This barrier design was developed in Europe and only became available in the United States in early 2000. With more traditional rigid systems, such as plate beam guardrail, there is a greater likelihood that the vehicle will be redirected back to the shoulder or lanes of traffic. Each barrier system has its application. Rigid barriers are very effective at preventing vehicles from leaving the road and hitting fixed objects, going over steep embankments, or crossing into nearby traffic when there is no space to provide a wide median to separate the traffic.

As explained in NCHRP Report 711, there are limited locations where HTCB can be laterally placed in the median. One is near the shoulder as you see along the metro freeways. The other location is near the ditch bottom - if the ditch cross section and soil conditions are appropriate. Unfortunately, median ditches are often wet and too soft to support the cable and allow it to perform as designed, so that is why so many locations have the barrier installed nearer the shoulder. 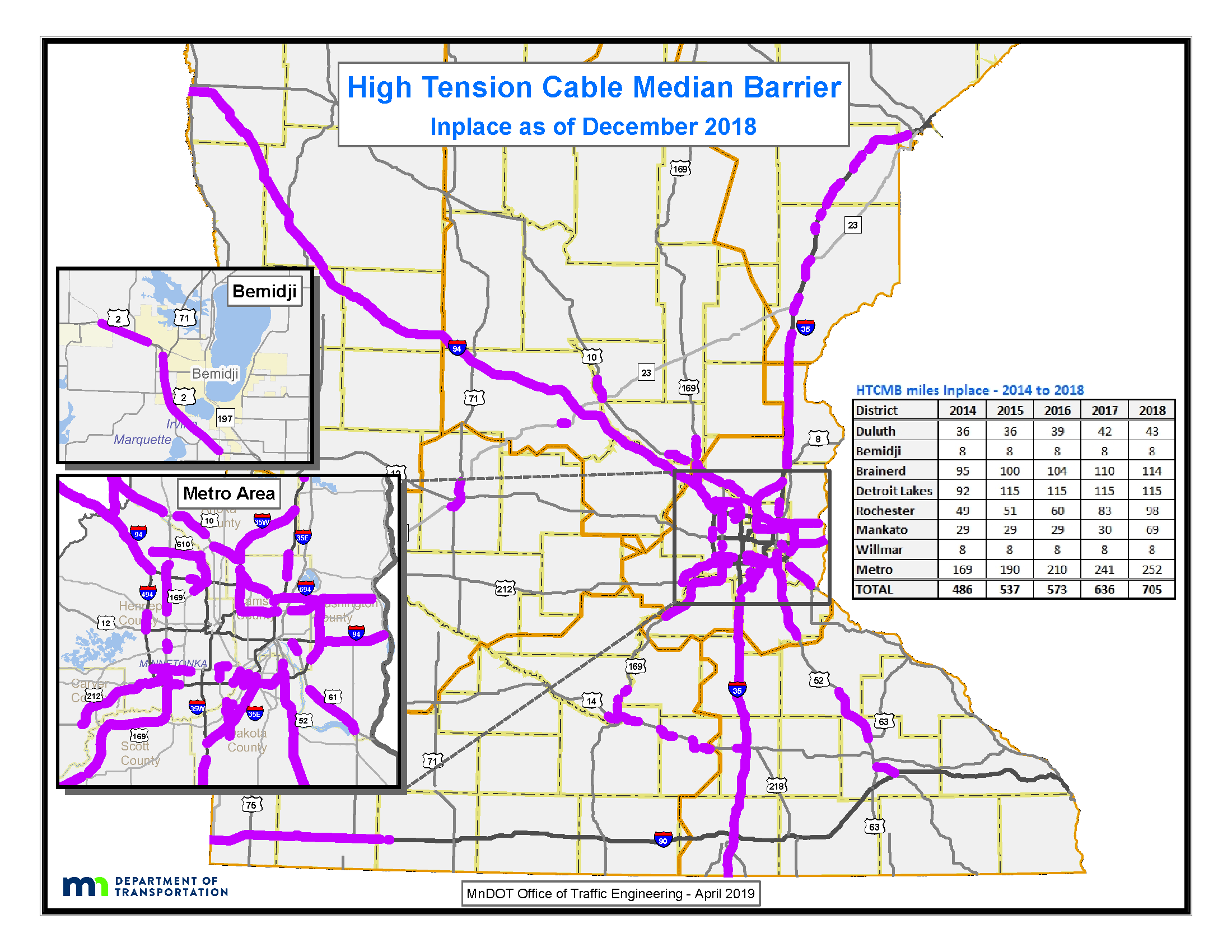 As traffic volumes grow and the cable median barrier system expands, there will be a significant increase in the cost to maintain the barrier system statewide.