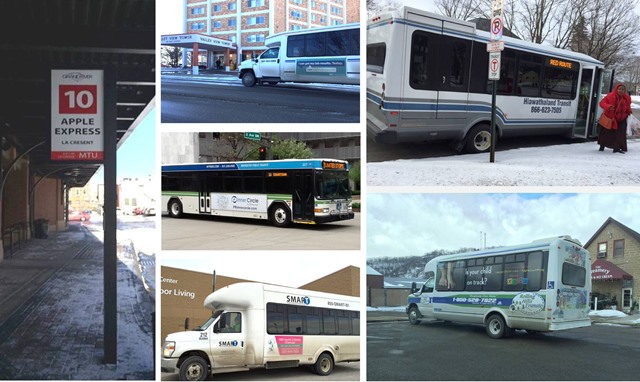 The Southeast Minnesota travel study is evaluating opportunities for inter-county and intercity service in an eleven-county region (MnDOT District 6):

As employment centers continue to grow in the Twin Cities and Rochester—along with several smaller job centers in the various counties included in study area—it will become increasingly important to provide transit and transportation service options that can connect workers across Southeast Minnesota to these jobs. Developing routes and services that cross city and county lines will require increased regional coordination.

Communities in these counties are served by a range of fixed routes, deviated routes, volunteer drivers, and demand-response transit service. The major transit hub in southeast Minnesota is Rochester, where a local fixed-route transit system (and paratransit complement) operate within the city, and which is also served by the privately operated Rochester City Lines system. Rochester City Lines provides service to downtown Rochester from locations throughout Southeast Minnesota and the Twin Cities.

All of the counties in the study area except Winona are projected to grow in the coming decades, with overall population growth averaging 15% between 2015 and 2045. As the Mayo Clinic embarks on a $6 billion expansion in Rochester, Olmsted County's population is projected to grow by 22% during this period—about 45% of all of the growth in the 11 counties. As the largest city in the District 6 study region, Rochester provides the greatest number of services and retail options; other subregional activity centers include cities like Winona (28,000), Austin (25,000), Owatonna (25,000), Faribault (23,000), Albert Lea (18,000) and Red Wing (16,000), all of which have a retail centers and public and community services.

Expanding regional transit options to meet growing demand presents an opportunity to enhance economic opportunity and quality of life for the region's residents, while also coordinating with existing local services that have already made significant progress in consolidating and finding service efficiencies.

The study is scheduled for completion in March 2016.

This included a literature review, a travel behavior inventory, and an analysis of demographics and transportation providers.

The study includes an analysis of major travel corridors and potential transit ridership along each corridor.

Based on needs, public input, demand assumptions and best practices in the provision of regional services, the study will identify service standards, prioritize appropriate service types, and describe opportunities to build a network of transit alternatives in Southeast Minnesota.