“On Friday the 14th of August I was returning to Minneapolis from north of Thunder-bay, Ontario.  About 2:30 PM I stopped in Duluth for a cup of coffee.  Some time later as I drove south on I-35. The rumble strip on the right of the southbound lane snapped me back to attention. I had dozed off and the rumble strip undoubtedly saved me from what could have been a fatal accident." —Rodger Chambers

Statewide, there were over 1,850 life-changing (fatal and serious injury) lane departure crashes between 2008 and 2012. Due to this, MnDOT implemented a rumble policy in 2011 to reduce lane departure crashes systematically and proactively. The policy requires that centerline rumbles be placed on all rural, undivided roadways with a posted speed limit of 55 mph or higher where paved surface is constructed, reconstructed or overlaid after April 1, 2012. Centerline rumbles reduce crashes on rural two-lane roads by:

There are well over 800 miles of centerline rumble strips/stripes on the state highway system as of 2012. 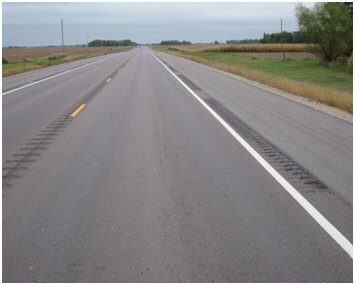 Rumble strips are grooves or rows of indents in the pavement designed to alert inattentive drivers through noise and vibration and reduce the number of accidents.

Where you'll find them

What are mumble strips?

Lane departure crashes can and do occur on all roads in Minnesota which is why a systematic, proactive approach is being followed; however, certain factors have been identified indicating a greater incidence of lane departure crashes and these are the characteristics that have been used to determine where MnDOT will install rumbles.

One of the intents of the rumble is to get the driver’s attention through noise, and this can be disturbing to residences near state highways. In the past, MnDOT used edgeline rumbles, which was found to have a fair amount of nuisance hits as some drivers “drive the fog-line”. In order to reduce the amount of nuisance hits, the rumble policy encourages the use of centerline and shoulder rumbles instead.

For rumbles to be effective, there must be a vehicle interior noise increase of 6-15 dB. MnDOT rumble design results in a 15 dB increase. Exterior noise increase is variable, and depends on distance and environmental factors. One MnDOT study of rumble noise found the following noise levels near shoulder rumbles: