Maps are one of the most valuable tools in the Safe Route to School (SRTS) toolbox. Maps can help you communicate about:

Maps can be a useful encouragement tool and can help steer students and parents/guardians toward routes that are safer. 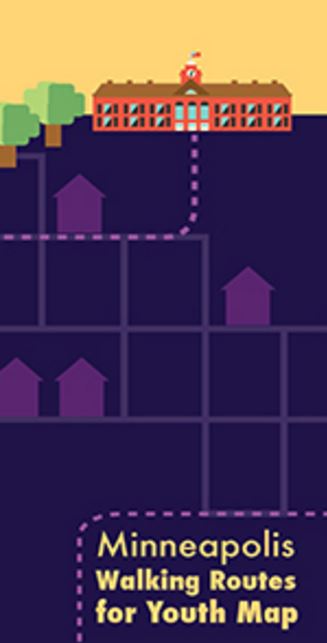 At a Glance: Minneapolis Public Schools and the city of Minneapolis have a comprehensive Safe Routes to School program that includes several planning initiatives. In 2007, a task force was created to develop the Minneapolis Safe Routes to School Strategic Plan. Since the strategic plan was developed, schools and the city have completed programmatic activities as well. In 2012, the City developed a Walking Routes for Youth map that analyzed and recommended walking routes to every school in Minneapolis. The walking map also allows the city to prioritize where it will make improvements during other city road projects and which projects they submit for grant funding.

The original intent was to create and distribute walking maps to the community, focusing on neighborhoods with crime and personal safety issues and help focus other improvements such as signing, pavement marking and other route improvements. The project evolved into a city-wide process with public input that identifies prioritized walking routes for Minneapolis students.

Results: The map was completed in 2014 and distributed to schools, park buildings and made available online as an interactive map. The map led to success in applying for infrastructure funding since priorities for improvements were identified. Public works uses the tool to make improvements in key areas when non-Safe Routes to School  projects are happening. The school district Safe Routes to School coordinator also uses the tool to develop walking schools buses and bus stop and walk programs.

Do you have a local success story to share for SRTS Mapping? Submit a brief summary to saferoutes.dot@state.mn.us.